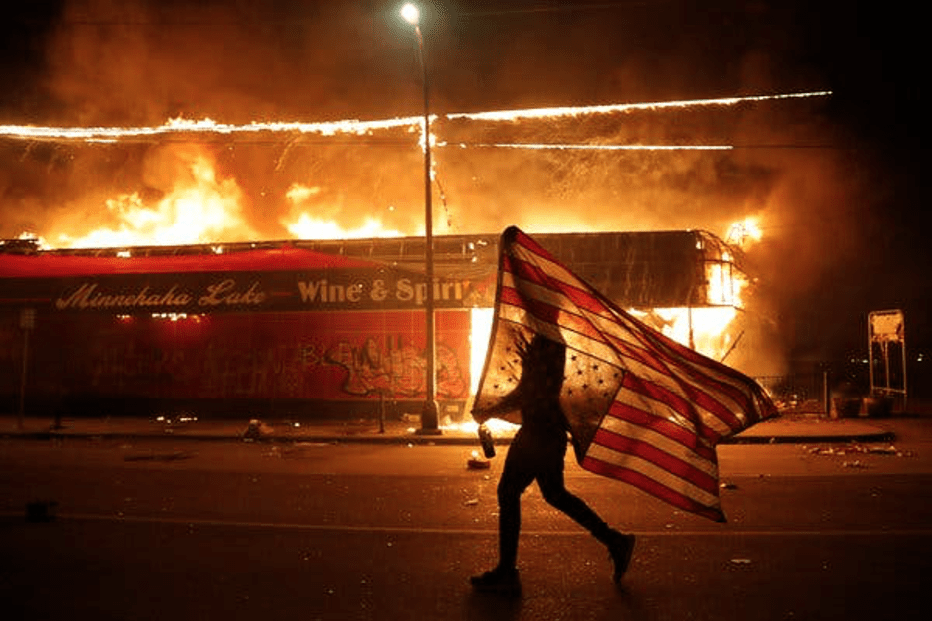 As of the writing of this post, protests against police brutality and the disproportionate policing of people of color—sparked by the death of George Floyd—are taking place around the country.[1]  In many of those cities, the demonstrations have turned into or in some way led to riots—the protest’s rowdier and generally disfavored cousin.[2]    Riots have acted as a catalyst for social change and/or as an expression of anger about political and economic circumstances and systems throughout history.[3]  Some of these protests seem to be turning violent even when many of the protestors do not believe that is the best course of action or the organizers do not intend the outcome.  The purpose of this article is neither to examine any ethical justification for rioting nor to examine its efficacy as a tool of social change, though that has been discussed elsewhere.[4]  The purpose here is simply to discuss one potential legal consequence of rioting in the United States—criminal liability, and offer a thought about how to avoid that criminal liability if one does find himself in the middle of a riot through no fault of his own.  This article does not discuss related charges like disorderly conduct or more general unlawful assembly, nor does it touch on potential issues of criminal and civil liability resulting from specific actions taken within the riot—like arson, or the issue of merger.

Most states have some sort of anti-rioting criminal statute. Alabama, for example, makes rioting a Class A Misdemeanor.[5] Here, “[a] person commits the crime of riot if, with five or more other persons, he wrongfully engages in tumultuous and violent conduct and thereby intentionally or recklessly causes or creates a grave risk of public terror or alarm.”[6]  Likewise, “inciting to riot” is made a misdemeanor by statute.[7]  In Campbell v. Birmingham, the Alabama Court of Criminal Appeals elaborated on the description of conduct necessary to trigger the statute.[8]  In Campbell, the defendant and some associates chanted in a political demonstration inside the University of Alabama at Birmingham Hospital Cafeteria; when the police asked them to leave, there was an altercation.[9]  The court wrote that “tumultuous behavior” required a showing of conduct stronger than “aggressive solicitation.”[10]  Additionally, the five-person requirement could be reached by encouragement alone from others.[11]  This results in a fairly broad definition of a riot.

California’s criminal riot statute also states a broad proposition: “Any use of force or violence, disturbing the public peace, or any threat to use force or violence, if accompanied by immediate power of execution, by two or more persons acting together, and without authority of law, is a riot.”[12]  People v. Bradley involved a standoff between a vineyard owner and an organized group of laborers engaged in a strike.[13]  The court held that the defendant need not have acted violently so long as he or the others involved threatened violence and had the ability to carry it out.[14]

Many states hold to that model.  Oregon’s riot statute is very much along those lines.[15]  Michigan has a series of statutes describing riot, its penalty, and related offenses very similar to the ones described above.[16]  Virginia is likewise similar, resulting in a misdemeanor.[17]  Florida takes a slightly different tack with two statutes, one of which seems to be addressed more toward violence against people and another addressing violence against property; each results in a third degree felony, the least severe felony.[18]  This is by no means an exhaustive jurisdictional survey, of course, and other states may have drastically different statutes dealing with riots and similar offenses.  This random assortment of states is intended to show the general principles found in many anti-riot statutes because the statutes were based on the common law.

Minnesota’s statute, which may be relevant to many over the next few years, approaches the act by describing tiers of severity.[19]  Third degree riot, the lightest offense, is similar in structure and breadth to the riot statutes of Alabama and California; three people must be gathered to disturb the peace intentionally by violence or threat of violence against person or property.[20]  Like the others mentioned above, it is punishable by up to one year in prison or a fine, or both.[21]  Riot to the second degree adds the requirement that one is armed or knows that another person involved “is armed with a dangerous weapon.”[22]  That degree likewise raises the term of imprisonment to a potential five years and the fine to a potential $10,000.[23]  Riot to the first degree is met if the actor is involved in a riot, “is armed with a dangerous weapon,” and another person dies. First degree riot is punishable by up to twenty years in prison and/or $35,000.[24]  Each of the three tiers still adheres to the principals developed from common law. However, the two higher tiers add some element and increase the severity of the punishment.

Similarly, the federal government implemented an anti-riot statute in 1968, passed as an attachment to the Civil Rights Act of 1968 (the Fair Housing Act).[25]  The statute is based in the Commerce Clause.[26]  Thus, it only applies to one who “travels in interstate or foreign commerce or uses any facility of interstate or foreign commerce, including, but not limited to, the mail, telegraph, telephone, radio, or television, with intent—” to incite or join, or perform most any act that may further the cause of the riot.[27]  The penalty in the federal statute is imprisonment of up to five years, or an unspecified fine, or both.[28]  However, the federal statute recognizes the preeminence of the states’ police powers in subsections (c) and (f).[29] According to (c), “[a] judgment of conviction or acquittal on the merits under the laws of any State shall be a bar to any prosecution hereunder for the same act or acts.”[30]  If a state prosecutes someone for an act under its riot statute, the federal government cannot do the same.  Likewise, (f) provides that this statute does not prevent a state from prosecuting the relevant conduct under its own laws.[31]  The federal riot statute was held to be constitutional in National Mobilization Committee to End War in Viet Nam v. Foran.[32]  It was again found constitutional on an additional free speech challenge based on overbreadth in United States v. Dellinger.[33]

Given the structure of the statutes discussed here, and the elements handed down from the common law, it seems that liability for rioting can be avoided in many cases.  Say person “A” is engaging in his civic duty, protesting in a local park with a group of folks.  Suddenly, the other folks involved, or a group of agitators who want to delegitimize A’s protest, begin destroying the benches and fountains and lighting garbage cans on fire.  At that point, A must decide whether he wants to participate.  He has not purposefully engaged in any violent or tumultuous conduct. He has not engaged in any sort of violence against persons or property.  If A sees avoiding criminal liability for rioting as an overriding concern, he can likely walk away.  The fact that he does not engage in the violent conduct should prevent his arrest and prosecution.  Obviously, if the opposite were true and he personally lights the fires, he can likely be prosecuted under any state statute discussed above.  Or if A actually travels from the state over, and directs the crowd to riot, he can likely still be prosecuted under the state statute.  Coincidingly, if A comes from out of state to instigate, and the state chooses not to prosecute A, but the federal government believes he should be prosecuted, then it can do so.

The above hypotheticals do not address or account for human error or intentional wrongdoing on the part of the government.  It is possible that the police may arrive just as the protest turns violent, and arrest everyone they can who is in the park at the time.  Or it is possible that some policemen might take issue with the subject of a protest and intentionally arrest peaceful protestors under charges of rioting.  One potential aide in those sorts of circumstances may be documentation of one’s own actions during the protest, to be used as evidence in a court of law.  More importantly, these problems implicate important matters of free speech, free assembly, and fair policing, but are beyond the scope of this article.

Again, this is not meant to explore the rightness or wrongness of violent protest or riot generally.  This is simply a look at some of the laws promulgated by the states and the federal government and how they might affect a person engaged in protest about any injustices in our society today.  The state laws preempt the federal ones, as described in the federal statute.  Most state statues appear to be derived from the common law definition of riot.  The federal statute only applies if the person alleged to have violated the law crossed state lines to do so or engaged in the behavior from across state lines by some means of communication.

[2] See Sheila Regan et al., As Fear Settles over Minneapolis, Protests and Violent Clashes Spread Across the U.S., Wash. Post: Politics (May 30, 2020, 9:00 PM), https://www.washingtonpost.com/politics/as-fear-settles-over-minneapolis-protests-and-violent-clashes-spread-across-the-us/2020/05/30/ece33416-a297-11ea-b5c9-570a91917d8d_story.html (discussing a Minnesota protest that turned into a riot). See also Shane Harris, Officials Blame Outsiders for Violence in Minnesota but Contradict One Another on Who Is Responsible, Wash. Post (May 30, 2020, 7:39 PM), https://www.washingtonpost.com/national-security/officials-blame-outsiders-for-violence-in-minnesota-but-contradict-each-other-on-who-is-responsible/2020/05/30/d722e9d6-a2b1-11ea-b5c9-570a91917d8d_story.html (discussing the tension of a protest that turned violent).

[3] List of Riots, Wikipedia, https://en.wikipedia.org/wiki/List_of_riots#Seventeenth_century_and_earlier (last visited May 31, 2020, 11:00 AM) (listing many significant riots from the death of Julius Caesar to the present).

[4] E.g., When Rioting Is the Answer, Zócalo Public Square, Time Magazine: Society (July 9, 2015, 2:16 PM), https://time.com/3951282/riot-violence-use-american-history/ (presenting a short discussion from four perspectives of the efficacy of rioting as a tool of social change).

[11] See id. at 68-70 (holding that encouragement from five persons eating in the cafeteria but not originally involved in the protest would be enough to satisfy the element, and that anyone encouraging the defendant was a part of the riot).

[15] See Or. Rev. Stat. Ann. § 166.015 (West 1971) (“A person commits the crime of riot if while participating with five or more other persons the person engages in tumultuous and violent conduct and thereby intentionally or recklessly creates a grave risk of causing public alarm.”).