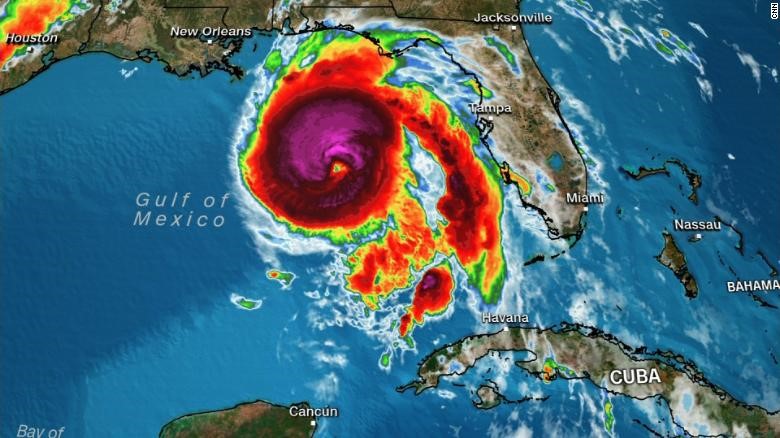 Photo Credit: Brandon Miller and Brandon Giggs, Michael the Strongest Hurricane to Hit the Continental US since Andrew, CNN (Oct. 11, 2018; 9.46 am) https://www.cnn.com/2018/10/09/weather/hurricane-michael-stats-superlatives-wxc-trnd/index.html.

Hurricane Michael made its way up the 14th Judicial Circuit on October 10, 2018.[1] This storm was the first Category 4 hurricane to make landfall in Florida’s Panhandle since 1851.[2] Top winds reached 155 mph.[3] Additionally, this was the third most intense hurricane to make landfall in the U.S. recorded history based on central pressure at 919 millibars minimum pressure.[4] To say the effects were devastating is an understatement; there were at least 72 fatalities, 57 of those in the United States.[5] Records show the storm had a high-water storm surge of 9 to 14 feet from Mexico Beach through the Apalachee Bay.[6] Total economic losses are estimated at approximately $25 billion.[7] These include privately insured wind and storm surge damage to residential, commercial, and industrial properties and automobiles.[8] Approximately a million customers in Florida, Georgia, Alabama, and South Carolina lost power.[9] Many community members went without power or internet for two months.

Courts and bar members alike went without roofs, water, electricity, internet, cell phone service for days after the storm.[10] Many of the law offices in downtown Panama City will be closed down indefinitely.[11]

The question is what affect has this storm had on litigation in the Panhandle? The Florida Bar Association is watching closely to keep up with the influx of litigation in the aftermath of Michael.  Many attorneys are offering services pro bono. The Florida Supreme Court recently stated in January that it would need four more circuit courts to keep up with the fiscal year 2019.[12] The dockets are expected to be most crowded with housing disputes, due process issues, and other storm-specific claims.

According to executive director of Legal Services of North Florida, lack of housing is one of the biggest obstacles after Michael.[13] “Landlord-tenant, landlord-tenant, landlord-tenant” issues are creating a flood of litigation.[14]  Such disputes include tenants unsure of what to do with rental housing that is now inhabitable.[15] Another issue is that many tenants have lost their jobs after the storm and can no longer afford rent.[16] The most serious issues deal with the rate of evictions and spiked rent for undamaged housing, even when tenants have current leases.[17] A legal aid attorney reported that he had fifty eviction cases arise in less than a week just for one complex.[18] Many landlords have been posting eviction notices on their tenant doors, allegedly hoping the tenants will not understand the legal system enough to take them to court.[19]

Due Process for Inmates

The criminal court in Panama City returned to due process practices in the immediate aftermath of Michael unseen in decades.[20] For example, for ten consecutive days right the storm, Judge Thomas Welch met with inmates in the Bay County Jail, not the courtroom. He wore the only clothes he owned—a Polo shirt and flip-flops—rather than the traditional black robe.[21]  Neither the jail nor courthouse were spared from the storm, and by necessity, many procedures had to be adjusted.[22] Under normal conditions, the court would hold first appearances through video transmitted from the jail to the courthouse.[23] However, repairs at both locations made this an impossibility. Instead, inmates were subject to antiquated practices for first appearance hearings such as meeting with the judge face-to-face to hear and meet the charges against them.[24]

Judges, however, assured that meeting with inmates face-to-face like this did not unfairly or prejudicially affect the process of determining bond.[25] In an interview, Judge Welch said he still took into account factors such as circumstances of the arrest, the person’s residency, and criminal history.[26] The exception to this is that one factor missing from traditional procedures was the presence of the family in some cases. Families are typically able to be present as a support system for such bond hearings at the courthouse.[27] Many families were unable to be there, as the debris-filled roads made access unfeasible.

The entire court system was shut down for two days.[28] The jail was barely operational and had no power or running water.[29] No one could even get to the jail to check until the roads were cleared.[30] Massive crews of utility workers and jail personnel had to personally clear paths for generators.[31] While the inmate phone system was down for several days, Bay County Sherriff’s Office warden Maj. Rick Anglin said that they amazingly maintained the ability to post bond with “cash, money order, a cashier’s check or a family member [going] through a bondsman.”[32] The warden assured that the court has done everything in its power to ensure inmates receive due process.[33]

Another difference in the Bat County criminal justice system after Michael was that many people had storm-related causes or excuses for their arrest.[34] One of the main reasons for arrest was violation of the mandatory curfew.[35] For example, in one case a man drove from Bonifay into Panama City to make sure his family made it alive through the storm.[36] His car broke down, and as a result, he violated disaster curfew.[37] In another case, a man was robbed by the inhabitants of the house at which he was staying, and therefore had “no choice” but to be out after curfew.[38] A man arrested for domestic violence asked the court not to issue a “no contact” order because he did not want his partner to be left on the street.[39] He said his whole house got demolished, and they were both staying with his parents in temporary housing.[40]

There are many other cases arising from hurricane Michael. These include jumping through FEMA hurdles, foreclosures, bankruptcies, and private insurance claim problems. Within five months of the storm, 143,600 insurance claims had been filed with an estimated insured-losses of over $5.5 billion.[41] Other cases include parent-custody battles, where a parent is under an order not to leave the area but now need to relocate due to the loss of their housing or employment.[42] After even 6 months, there is still a lot of uncertainty as to exactly what the scope will be on litigation in the Panhandle when things settle down, though it is certain to be catastrophic.

Conclusion: The Recovery Response from the ABA

There are prolific needs in the 14th Judicial Circuit of Florida due to Hurricane Michael. However, the American Bar Association has responded positively to the hardest hit-areas, such as Bay County. The ABA President Bob Carlson went to Florida to investigate recovery efforts and aid in relief[43] Additionally, the Young Lawyer’s Division has set up a toll-free number for storm victims to call for legal help.[44] So far, there are over 196 volunteers.[45] Lawyers who would like to volunteer can contact the organization at https://www.lsnf.org/hurricane-michael/. To volunteer to do any pro bono through that agency, go to https://www.lsnf.org/sign-up/. There is still great need, and likely to be even more legal services required for years to come.

[13] Gary Blankenship, The Needs of Those Affected by Hurricane Michael Are Still Great, The Florida Bar (Jan. 1, 2019) https://www.floridabar.org/the-florida-bar-news/the-needs-of-those-affected-by-hurricane-michael-are-still-great/; see also Federal Disaster Assistance Approaches $1 Billion for Hurricane Michael, 2019 WLNR 7945851 (explaining that nearly 2,100 households displaced due to Hurricane Michael are now staying in hotels provided by FEMA, and 760 families have received temporary housing units such as mobile homes and travel trailers. Additionally, over 7,800 temporary blue roofs were installed, though these are only short-term solutions for some with the housing crisis).

[23] See Fla. Crim. P. 3.310 (“Except when previously released in a lawful manner, every arrested person shall be taken before a judge, either in person or by electronic audiovisual device in the discretion of the court, within 24 hours of arrest.”).